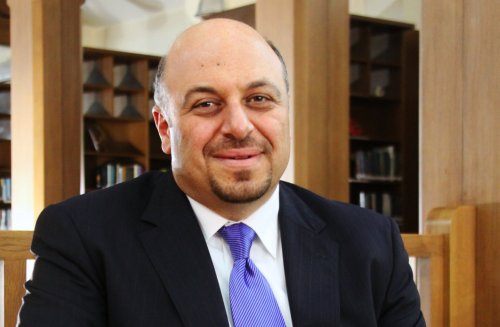 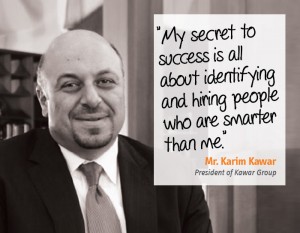 Akhtaboot sat down with H.E. Karim Kawar, former Jordanian Ambassador to the USA and President of Kawar Group to talk about how his journey in as Ambassador in Washington DC helped shape his views on the current Jordanian economy.

What does a typical day look like for you?

I’m an early riser. I start my day with a healthy breakfast. I run multiple businesses, so my typical day involves a lot of meetings. I meet with each CEO and their teams individually for quick updates on the latest happenings and to provide them with the support they need. At the end of the day, they are the executors.

Do you remember your first job? What was your position?

I started my first company at the age of 20. I was the CEO of Ideal Dimensions Co. –the first Apple distributor in Jordan. It was an exciting time for me when Macintosh was first introduced. It was also challenging because I was managing people twice my age.

What has been the secret to your success?

I think success is all about identifying and hiring people who are smarter than you. In the year 2000, I was invited to become an Eisenhower fellow, which meant leaving my job for two months while someone else took over my job. This was a true test for the leadership of the organization. Luckily Mr. Hanna Zaghloul stepped in as General Manager to fill in my place while I’m gone. After I returned I didn’t go back to managing any of my companies. So in my opinion, the formula to success is realizing that certain people have skills and talents and can do a better job. This allowed me to move onto my next venture.

How did you become the Jordanian Ambassador to the USA?

My father Tawfiq Kawar always insisted that you can be successful in your business but you always have to give back to our society. He was very involved in the Rotary and their motto is ‘service above self’. He always encouraged us to take on roles outside of the business.  Being appointed as Jordanian Ambassador to the USA happened coincidentally. At the time, I was President of the Jordan Computer society which was focused on professionals who work in the ICT sector. When His Majesty King Abdullah ascended the throne in 1999, he shifted his focus towards turning Jordan into a knowledge economy. So I took on the responsibility as the ‘architect’ of what has become known as the REACH Initiative. REACH set a framework on how we can transform Jordan from what was an emerging ICT sector to what has become a recognizable industry for Jordan.
During that period I was appointed to the Economic Consultative Council, which was a group of 20 people who acted as advisers to His Majesty on different issues. His Majesty was fond of what we did for REACH and was also looking for ways to capitalize on Jordan’s Free Trade Area agreement with the United States. He wanted someone that would understand the economic side of those issues and the opportunities that Jordan can benefit from. I was given an offer I couldn’t refuse.I was only 36 years old at the time and I had to resign from 14 boards. I had the honor to serve as Jordan’s Ambassador to the United States and Mexico, which was a truly a life changing experience.

What would you consider an achievement while serving as the Jordanian Ambassador to the USA?

When I met with my Jordanian Diplomats at the Embassy for the first time, I asked if there was a strategic plan. They asked:“what do you mean by strategic plan? This is an embassy.”I felt discouraged. Then Deputy Chief of Mission got into the executive MBA program at Harvard for 6 weeks. So when he came back the first thing he asked me is was“how come we do not have a strategic plan?”So finally, we were all on the same page and we developed a strategic plan for our Embassy in Washington which was adopted by many other Embassies. We became more proactive and started investing further into the relationship between Jordan and the US. The next thing we did was the implementation of a customer relation management system (CRM). We developed a mailing list of 2,000 contacts which ended up becoming 8,000 active relationships by the time I left Washington. This has transformed the way the Embassy functioned and turned it into a transparent environment. The knowledge we accumulated through those relationships can be shared and utilized for Jordan’s benefit.

How do you evaluate the private sector’s role in bridging the unemployment gap in Jordan in comparison to the public sector?

In Jordan we definitely have an over employment in the government sector, which is a huge burden on our economy and a huge contributor to our national deficit. It is always the role of the private sector to create sustainable jobs, and it’s the government’s responsibility to facilitate the businesses of the private sector. But unfortunately, there is a mismatch between the output of our educational system and the requirements of the private sector. Today very few universities have succeeded in producing talent that fits the needs of the market, which places a bigger burden on those individuals. However, as we started developing the ICT sector just when the internet became accessible and prevalent to everyone, it leveled the playing field. Today a Jordanian has access to knowledge and information equally to an American. This is where I am hoping that the next generation can capitalize on the availability of information such as opting for online courses instead of spending time spinning around in their cars. Today our students are smarter than their teachers, and that’s why I am hoping that our educational system is shifted from a teaching based system to a learning one. There should be a quest for learning and I don’t see that yet. I feel that our youth are not driven or hungry enough for knowledge. It’s an ongoing process;you’re never done learning, you can always learn more.

We come across many job seekers that complain about the lack of career opportunities in Jordan, and companies on the other hand find it hard to find the right candidate as well. Where do you think the problem stems from?

Building an impressive CV is the first step into advancing your career. In today’s job market, if you start looking for a job after you graduate, consider yourself behind the curve! I highly recommend students to look for internships while studying or during summer. I would also like to mention that seed financing in the ICT sector has become a popular resort for many young entrepreneurs such as Oasis500 which provides seed funding up to 10,000 JOD to start a business with potential follow on as well.Even though startups involve higher risks, the startup scene is thriving in Jordan and is serving as a learning experience to those who are part of it. Cultural failure is a huge issue in Jordan. I strongly encourage a change of mindset as a society. What we need to do is to take more calculated risks. You can also learn from those who have failed before you.

What are the most important skills that you believe job seekers must possess?

Both hard and soft skills are extremely important to have in a job seeker. The ability to communicate in terms of expressing yourself well in Arabic and in English, coupled with the way you present yourself in public are extremely important for success in today’s marketplace. Having emotional intelligence and following through with your promises is also essential.

In your opinion, why do so many of our Jordanian youth leave for work abroad? Do you think it’s justified?

Today we are constantly talking about Jordan’s brain drain;Jordanians who seek opportunity elsewhere and those who have received their education in Jordan. I personally believe if someone gets an opportunity to work abroad and it makes economic sense, they should seek it. I am sure that many of those will come back to Jordan if similar opportunities existed, and even if there isn’t, they can create their own. But I encourage those who seek work abroad to stay in touch with the developments and opportunities that are currently happening in Jordan.

What changes would you like to see in the Jordanian job market?

I would like to see Jordanian companies appreciate their own young talent and acknowledge the value they can add to their businesses. Companies who train their employees on the job and send them to lectures and seminars, companies that help build a career path for those young men and woman. Employers should have a two way channel with their employees; allow them to speak their mind instead of simply giving them instructions.

What do you think of the Akhtaboot brand?

I’ve witnessed Akhtaboot’s growth since its founding and I’m very impressed. Akhtaboot has been a vital service to our HR department as it helps us reach out to job seekers who otherwise would not see an ad in the newspaper. I think Akhtaboot bridges that gap between the employer and the job seeker, which helps cut down a lot of wasted hiring time.

Mr. Karim is also Chairman of IrisGuard Inc., Kawar Energy and a partner in Optimiza. He is also Chairman of EDAMA , a private public partnership for sustainable energy, water and environment. He is a member of the Board of Trustees of the King Abdullah II Fund for Development, which aims to provide underprivileged segments of Jordanian society with economic opportunities.

From 2000-2007, Mr. Karim served as Jordan’s Ambassador to the United States of America and the Republic of Mexico. He has also been appointed by His Majesty King Abdullah as a member of the Economic Consultative Council and has served on various task forces serving this council and newly he has been appointed as a Chairman of the Board of Trustees for King’s Academy.

Mr. Karim Kawar has a B.SC. in Management Finance and Computer Science from Boston College, USA.

All English Posts, Interview with Business Leader of the Month (English)

What Super Productive Employees Do Differently