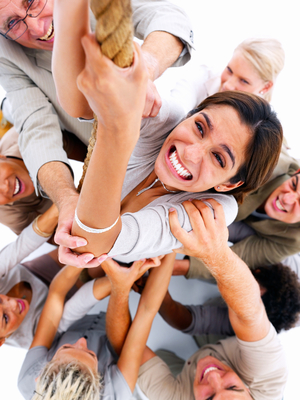 On a day-to-day level, maintaining a professional relationship with your colleagues while keeping in mind that they have different working styles is essential to creating a productive environment. However, sometimes overly competitive attitude can make this difficult to achieve and can create disagreements in the workplace. Workplace competition has both advantages and disadvantages. By only highlighting the downside of it, you overlook the potential benefits such as increasing innovation, creativity and motivation. On the other hand, it’s clear that too much competitiveness can be exhausting and intimidating, pushing those who are less competitive to the side, can eventually result in bad office politics. Akhtaboot is here to the rescue with some tips on how to handle overly competitive attitude in the workplace.

Get to Know Your True Motivators

Many of us compete against other people for different motives. It could be because you want to have what others have, or it can be a need to conform to workplace norms, or it can simply be in your nature. It’s important to evaluate your own level of competitiveness when it comes to work. If your competitiveness is derived from feeling insecure for any reason, make an effort to address the trigger of that insecurity. Perhaps you need more training or career development in order to be able to get to the next level. Research the available training options available so that you feel reassured that you’re on the same level with your competitors at work.

Treat your Competitors with Courtesy and Respect

Overly competitive coworkers can be difficult to handle and deal with. Tempting as it can be to react in the heat of the moment, try to be friendly while keeping in mind that an overly competitive person can be potentially undermining. On the other hand, chances are if you don’t give them the reaction they’re seeking, they’ll realize that it’s a waste of time to try to evoke you and they’ll feel more motivated to treat you nicely in return.

Sneaky competitive colleagues are always on the look for ways to make others look bad. They tend to consider everyone else as a potential threat to his or her field. Spotting a sneaky competitive colleague is easy. They never let your boss know that you were involved in the project, or they usually “forget” to forward emails that concern you, and will never hesitate to declare that they were the only responsible person for the project’s outcome in which you played a major part too. Since such people are unlikely to change, you’ll need to figure your way around them as well as stand up for yourself.

Turn the Competition into your Favor

Competitive colleagues are usually outspoken about their determination to surpass others. Try to come up with ways to focus that ambition to your own good and the good of the team. For example, asking them for their advice and input about the projects you’re working on together, rather than assuming they’re going to run away with all the glory. This flatters them while giving you an opportunity to learn from them. Keep in mind that competitive personalities can be a source of morale-boosting to the rest of the team provided they meet the deadlines and don’t behave in a territorial manner.

What to Do When your Best Employee Quits