Akhtaboot as one of the Fastest Growing 500 Companies 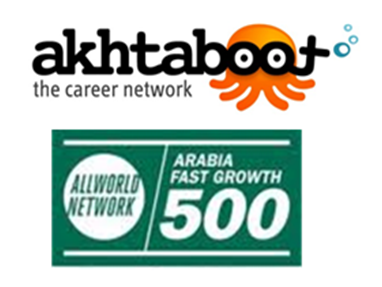 Akhtaboot – the career network is proud to announce that it has been included in the “Arabia Fast Growth 500” List, a project of AllWorld Network which highlights the ranking of the fastest growing companies in the Middle East and North Africa (MENA) region, Turkey, and Pakistan.
In the Levant, Jordan took first place with 27 fast growth company winners, followed by Lebanon with 14 winners, Palestine with two winners, and one winner from Syria. Overall, Jordan was fourth on the Arabia500, competing against the much larger economies of Turkey, Pakistan, UAE, and Saudi Arabia.

Being selected as an Arabia Fast Growth 500 company is an honor as well as a true testament to the efforts of our team who have played an instrumental role in helping Akhtaboot achieve sustained growth year-over-year. With this announcement, we reaffirm Akhtaboot’s commitment to delivering the best online recruitment services to help link job seekers from across the MENA region with their dream jobs.

Each entrepreneur on the Arabia500 ranking has grown an average of 40 percent annually between 2008 and 2010, created an average of 200 jobs per company, and is succeeding in industries from web technology to food, and construction to consulting. The Levant winners are in Istanbul for the 2nd Global Summit on Entrepreneurship, December 3-5.They will meet with Arabia500 winners from 11 other countries and will be recognized by Turkish Prime Minister Erdogan.

Advance Your Career This Holiday Season