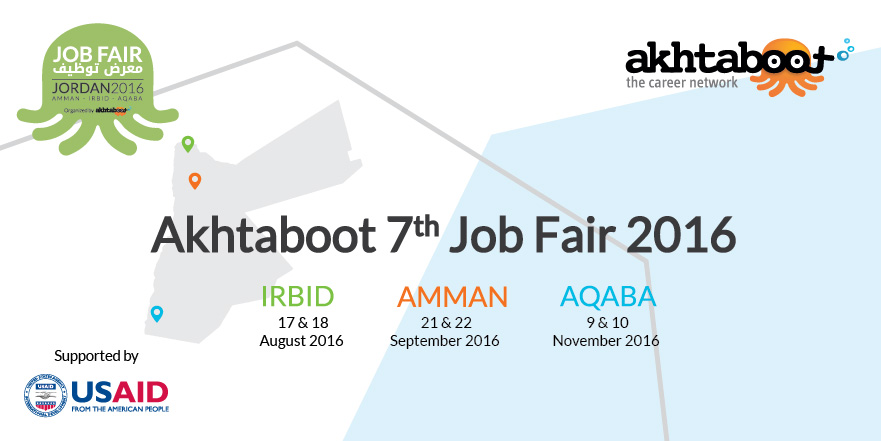 Amman, Oct. 17th 2016 – Under the Patronage of His Royal Highness Crown Prince Al Hussein bin Abdullah II, Akhtaboot – the career network (www.akhtaboot.com) is proud to announce that it will be holding “Akhtaboot 7th Job Fair 2016 – Aqaba” – Aqaba’s biggest career event, on the 9th and 10th of November 2016 at The InterContinental Hotel Aqaba, Dhana Hall.

“Akhtaboot 7th Job Fair 2016 – Aqaba” is supported by the USAID Jordan Competitiveness Program (JCP). The event aims to provide job seekers and companies in Aqaba with a platform of employment opportunities covering a variety of sectors and job roles. Additionally, courses on various career-advancement topics, including CV writing and interview skills, will be offered to job seekers at no cost during the 2-day job fair.

Mr. Yousef Shamoun, CEO and Cofounder of Akhtaboot said: “Strategically situated on the Red Sea, Aqaba solidifies Jordan’s position as a gateway and hub to the region for global commerce in addition to being a prime tourist destination. Investments and projects are increasingly ongoing in the city, in order to enhance accessibility to jobs and the quality of job seekers, Akhtaboot is proud to announce the launch of its biggest job fair in Aqaba under the Patronage of His Royal Highness Crown Prince Al Hussein bin Abdullah II. The job fair will offer unprecedented access to both employers looking to hire, and individuals seeking employment to meet with employers and access complimentary career skills development workshops to equip them with the necessary ammunition to penetrate the job market.”

“We are proud to be supporting this job fair in Aqaba, which is an indication of our commitment to reach out to all of Jordan’s residents with employment opportunities and to pair employers with talent throughout the country.”, said USAID JCP Chief of Party Dr. Wissam Rabadi.

It is worth mentioning that Akhtaboot has recently held its biggest career event in Amman this past September, which was the 2nd career event of three job fairs covering Irbid, Amman and Aqaba. “Akhtaboot 7th Job Fair 2016 – Amman” attracted more than 20,000 job seekers during its 2 days.

What Does Your Desk Say About You?