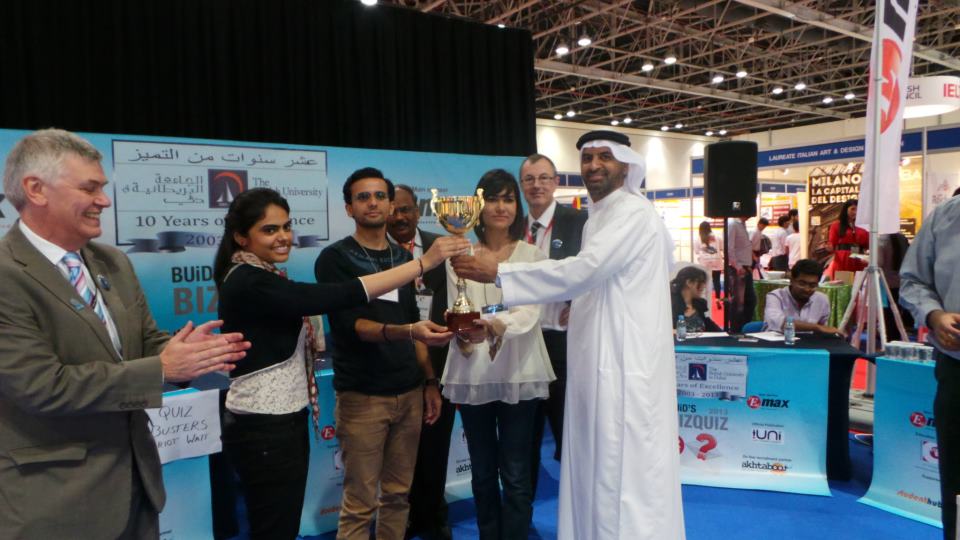 The British University in Dubai organized the 2nd Inter-collegiate BizQuiz at GETEX on April 18th 2013 in Dubai International Convention Centre. The competition was designed for University and college students pursuing their undergraduate studies. The competition was attended by Prof. Abdullah Alshamsi, Vice Chancellor of The British University along with Academics and staff from the University. The event was sponsored for the second year by E Max, Uni Magazine as the official publication of the event, Akhtaboot as the on-line recruitment partner, Dubai International Academic City as support sponsor and GETEX as the main education partner.

We are delighted to have had the opportunity as a local University to inspire students thinking and challenge their knowledge in such an exciting competition. I am equally delighted with the quality and intelligence shown by the participating students; it is a testament to the quality and caliber of the students we have in the UAE.

After the preliminary competition, five teams qualified for the final round of the competition whereby the participants were challenged to put their knowledge to the test. The quiz had many interesting rounds which kept the audience entertained. The Audience got the chance to test their knowledge, and the two lucky winners received a Samsung Nexus 7 each. The thought provoking questions created an atmosphere of fun and enthusiasm among the competitors and the audience as well.

Dr Elango Rengasamy, Head of the Finance and Banking programme at BUiD and the quiz master commented:

I’m very happy to see students compete with such enthusiasm. This competition gave the students the much-needed opportunity to test their knowledge and the chance to interact with students from other universities in a healthy and competitive environment.

The winning teams in the competition were ‘Xcel’ from Szabist University who won each a Smasung Note 2. The second place winner was BIT – TMKs from BIT Mesra, the Offshore Campus RAK, and they won each a Nexus 7 and in the third place Inglorious Quizzards from Bits Dubai and they won each an IPod.

The winning team expressed their happiness in participating:

It was truly a fun and an exciting experience. Also it was very informative and competitive at the same time. The BUiD Biz Quiz was very well organized and we are happy to be competing in it for the second year.

The success of the event echoed last year’s event success as a testament to BUiD’s willingness to encourage knowledge and healthy interaction between students from different institution.