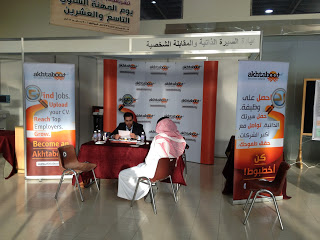 Akhtaboot – the career network is proud to pronounce its participation in the largest university career fair in Saudi Arabia, held by King Fahd University of Petroleum and Minerals (KFUPM) in Dhahran. The 29th KFUPM career fair was inaugurated by Prince Jalawi bin Abdul Aziz bin Musaed, Deputy Governor of the Eastern Province, and welcomed both students and the public during the period from 6th of May until the 9th of May, 2012.

Around 120 government and private companies and agencies participated in the event, with Akhtaboot handling the CV clinic, which provided students and graduates to be with personalized, one-to-one feedback on their CVs, highlighting the areas that need to be tackled in order to prepare for the needs of today’s job market.

Several companies and organizations from the GCC states were also invited to attend this year’s event, which coincides with the university’s 50th anniversary. The fair is aimed at providing talented young college students and graduates with the necessary skills to help them become more employable in today’s competitive job market with the opportunity to find their dream job.
It is worth mentioning that Akhtaboot has recently provided KFUPM with Akhtaboot Microsite Solution as part of AKhtaboot Cares Initiative – Akhtaboot’s CSR Arm.