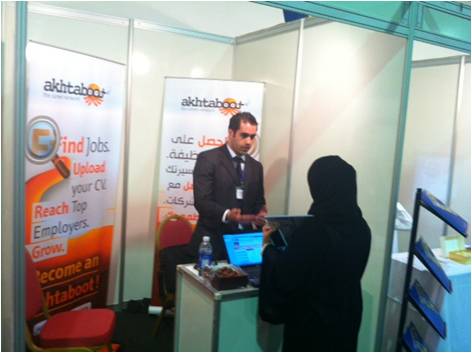 College of Business Administration held its seventh annual career fair which was attended by a group of leading companies in many different fields. Akhtaboot – the career network is proud to announce its participate in the fair offering many job vacancies targeting Saudi women. The career fair was held on CBA Campus in Jeddah, Saudi Arabia on the 19th and 20th of March 2012.

The 2-day event was inaugurated and held under the patronage of the Deputy Governor of Makkah Province Dr. Abdul-Aziz bin Abdullah Al-Khudairi, and provided university students and prospect employees with the opportunity to meet potential employers in a professional environment. Career-related seminars were also held during the fair with numerous noteworthy speakers under the theme of “Corporate Social Responsibility”.

We are very happy and proud that we have been successful in organizing this job fair which is considered Jeddah’s top career event with the participation of over 40 leading companies. Participants have described the outcome of 2012 job fair as the best in the past 6 years.

We are proud to take part in Jeddah’s top female career fair event with a mission that goes in line with the goals of Akhtaboot Cares Initiative in undertaking the unemployment problem in Saudi Arabia by helping link the right person to the right career opportunity.

With an ongoing dedication to employing talented, young Saudis, Akhtaboot is strongly committed to maintaining an ongoing presence in the region’s educational institutions and career events in the Middle East through Akhtaboot Cares Initiative – Akhtaboot’s CSR Arm.